Wargamers make money, then turn their gold into lead." 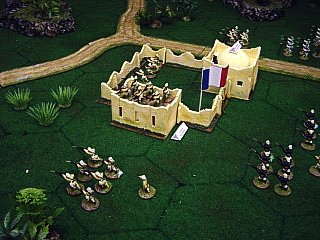 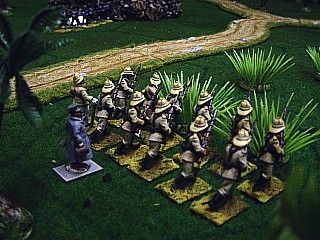 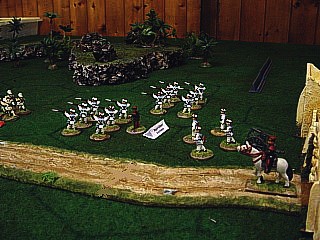 This is what it looks like in 28mm (other scales would do just as well). The surface of the table is covered with an imitation grass carpet, as sold in garden and carpet stores, on which a hexgrid (hexes are 15cm or 6" flat to flat) has been drawn using a cardboard master and a green felttipped pen, finished with a light spray of greens & browns using spraycans. The hexes are thus faded, though still visible and the game surface looks more realistic as opposed to the pictures above, showing the "bare" hexes. The whole job took about 3 hours and had to dry overnight. Cost around USD 30 for the carpet and the pen. Please note that, contrary to Battle Cry or Memoir '44, the flat sides of the hexes are facing the players' base lines in order to make proper forward movement possible. You could also use the ready made 10cm hex system as offered by Kallistra if you wish (see Designer's notes).

TOP ROW: a French A-class (6 figs) unit with NCO, a "platoon": two German Seebattalion units (2x6 figs) with NCO and a French "company" of 4 marines units (4x6 figs) commanded by an officer on foot. (The mounted officer couldn't be the commander of this company since only the MG team is in his ZOC). Units are "colour-coded" by using little round stickers in red, blue and green (sold in department stores etc), folded around the base of one figure per unit in the appropriate colour (this figure is the last one to be removed as casualty in the game). These stickers do not damage your bases and are easily removed after the game. For a balanced game, it is best to have about the same number of units per colour in a force.

FLASHMAN - Brigadier-General Sir Harry Paget Flashman (V.C. K.C.B., K.C.I.E.) (1822-1915) is the main (fictional) character in a very successful series of novels by George MacDonald Fraser and as such has been present and has taken part in most (military) events of the Victorian era. The goal of this "Afriboria" supplement is to let the character of Flashman appear in your miniature wargames. Other than the additions mentioned in the supplement below, the game is played as a standard "Afriboria" colonial wargame. For the moment no "true" Flashman figures are available in 28mm, but the two figs in 11th Hussars uniform (Eureka miniatures) come close enough... The other two in the top row are also by Eureka, but with whiskers painted on (as was done with the three Foundry figures on the bottom row). 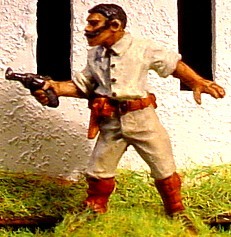 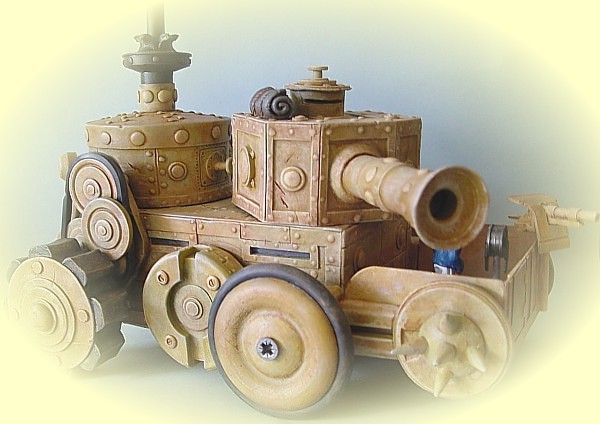 VICTORIAN ADVANCED TECHNOLOGY - A number of technological inventions emerged during the early to late 19th century but were rarely or never used in the development of weaponry. This supplement enables you to introduce inventions following these developments ("Victorian Science Fiction" or VSF) in the "Afriboria" wargame rules, or move the game forward into the early 20th century when aircraft, motor cars and tanks were introduced.